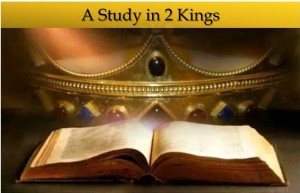 And Ahaziah fell through the lattice in his upper chamber which was in Samaria
And became ill, so he sent messengers and said to them
“Go, inquire of Baal-zebub, the god of Ekron whether I will recover from this sickness”
But the angel of The LORD said to Elijah the Tishbite
“Arise, go up to meet the messengers of the king of Samaria and say to them
‘Is it because there is no GOD in Israel that you are going to inquire of Baal-zebub, the god of Ekron?’
“Now therefore thus says The LORD, ‘you shall not come down from the bed where you have gone up
But you shall surely die'” Then Elijah departed
2 Kings 1:2-4

In this BIBLE study we will look at the consequences of seeking others instead of GOD, both in the Scriptures and today.

At first glance, 2 Kings 1:1, appears to be a random thought when compared to verses in the rest of the chapter. But for those of us who know our Beloved LORD GOD, we also know, HE does nothing nor says anything random. Our GOD is Spirit (Jhn 4:24), and HE gives us spiritual instruction for our daily lives (Rom 15:4, 2 Tim 3:16-17). This instruction comes through HIS WORD (The BIBLE). Since HIS WORD is spiritual, it cannot be fully understood with human reasoning. Only by HIS Holy SPIRIT, combining spiritual words with spiritual thoughts (1 Cor 2:9-16, Jhn 14:26) can we fully comprehend what HE is telling us. Prayerful examination of 2 Kings 1:1 reveals:
 The name Moab is used interchangeably with Moabites (Gen 19:37). The Moabites are Lot’s direct descendants (Gen 19:30-38). Lot’s firstborn daughter sought counsel within herself and did not trust GOD. Based on her own understanding, she feared she and her younger sister would die childless, ending their family line. So they acted in an unthinkable manner, reasoning incest was the only way to protect their lineage. Their behavior is a lesson for us today, proving why we must trust in our Beloved LORD GOD and not ourselves (Pro 3:5). Our understanding is limited. It is based on what we see, or what we think we know. Trusting in self instead of GOD is foolish (Pro 12:15), and leads to death (Pro 14:12).
 Since Moab is Lot’s direct descendant, he is a cousin to Israel, as demonstrated in the following chart. 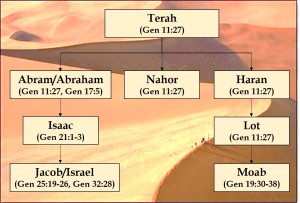 Moab’s great fear of Israel’s vast numbers depleting their resources (Num 22:1-4), also caused them to seek counsel within themselves, instead of trusting GOD. And in doing this, they not only disregarded family ties, but sought out Balaam (a diviner from Mesopotamia) to curse Israel (Num 22:5-7, Deu 23:3-6, Jos 13:22). Moab’s unfounded fear caused them to become enemies of Israel, continually at war with them (Jos 24:9-10) until King David. King David fulfilled prophecy spoken through Balaam (Num 24:17), when he defeated Moab, killed two thirds of their army, made servants of one third, and collected tribute from their King (2 Sam 8:2). Moab remained servants to Israel, paying tribute until after King Ahab’s death and the injury of his son King Ahaziah (2 Kin 3:4-5). Moab’s rebellion against Israel and its consequences will be discussed more fully in 2 Kings, chapter 3. Through Moab we are given another lesson, if Moab had trusted GOD and HIS counsel, they would have learned their fear would not happen. GOD had already protected them (Deu 2:9, 2 Chr 20:10-12). So instead of remaining under HIS protection, they ended up digging and eventually falling into the very pit they had planned for Israel (Pro 26:27, Pro 28:10, Est 7:10, Zep 2:8-9).

In 2 Kings 1:2-4 we read King Ahaziah has injured himself by falling through the lattice of a window in his upper story room. He sends out messengers to get a prognosis from a false god of the Philistines in their city of Ekron (2 Kin 1:2). In doing this, he adds sin to his sin (Isa 30:1-5). Ahaziah lived a very sinful life, he not only worshiped Baal and Asherah like his wicked parents King Ahab and Queen Jezebel (1 Kin 22:51-53), he also worshiped the golden calves Jeroboam had made (1 Kin 12:26-32). Ahaziah’s wicked heart kept him from seeking the true GOD in Israel, which led to his death (2 Kin 1:3-4). Could you be facing hard times and disappointment, because you do not trust in, or seek our Beloved LORD GOD (Jer 13:22-25, Jer 16:10-13, Jam 1:6-8)?

In 2 Kings 1:5-6 the prophet Elijah intercepts the messengers before they reach Ekron, and gives them the message from our Beloved LORD GOD (2 Kin 1:3-4). The messengers immediately return to the King. When Ahaziah inquires why the messengers returned, they give him the message from Elijah, “you shall surely die” (2 Kin 1:4). This is a warning to all who refuse to seek or even acknowledge the GIVER of both physical and eternal life (Isa 31:1-3, Rom 1:28-32).

In 2 Kings 1:7-8 when Ahaziah questioned the messengers about who had given them the message, they described what Elijah was wearing. Ahaziah knew it was him immediately, and sent to take him by force. Just a final observation before moving on, describing what Elijah was wearing in verse 8, not only helped Ahaziah recognize it was the prophet Elijah. But it also confirms our Precious JESUS CHRIST words about the identity of John the Baptist (Mat 11:14, Mat 17:11-13, Mrk 9:11-13), as prophesied by Malachi (Mal 4:5-6), confirmed by Gabriel (Luk 1:11-19), and demonstrated by John’s choice of clothing (Mat 3:4, Mrk 1:6).

In 2 Kings 1:9-12 Elijah’s response to the 51 men sent the first two times, might seem harsh, as he called fire down from heaven, killing them. But you must consider the following:
 Ahaziah like his deceased father King Ahab and mother Queen Jezebel, were enemies of Elijah, as he had prophesied all their deaths (1 Kin 21:1-29). Ahaziah’s contempt for Elijah and The GOD he served was reflected in his behavior. Instead of being moved to repentance of his sins and seeking The LORD, he sent a group of 51 soldiers to bring him by force (notice a command not an invitation was given in 2 Kin 1:9).
 The second group of 51 soldiers who came to take him by force, demanded Elijah “come down quickly” (1 Kin 1:11). Showing that Ahaziah like pharaoh refused to recognize Elijah as the servant of the true GOD in Israel; even though fire from heaven attested to it (1 Kin 18:21-24, 2 Kin 1:10). This second time when fire fell from heaven and consumed 51, it emphasized GOD’s sovereignty and HIS protection of HIS servants (1 Chr 16:21-22).
 When Kings didn’t like the messages of true prophets, they sought to silence them through imprisonment (1 Kin 22:26-28, Jer 37:15-21) or death (2 Chr 24:21-22, Neh 9:26, Jer 26:23). In fact, Ahaziah’s deceased mother years earlier had threatened to kill Elijah for killing her prophets (1 Kin 19:1-3).

In 2 Kings 1:13-16 Elijah went with the third group of 51 soldiers because their captain did not come commanding or demanding, but instead came humbly. This captain recognized the position of authority Elijah held as the servant of the true GOD in Israel, and he sought that the lives of his men, and himself would be spared. The Angel of The LORD telling Elijah to go with this captain to Ahaziah, demonstrates Elijah did not act on his own, the two previous times. And we also recognize that the heart of Ahaziah had been humbled to hear The WORD of GOD and not kill HIS prophet.

In 2 Kings 1:17 Ahaziah dies according to The WORD of The LORD, which Elijah had spoken. His brother Jehoram became King of Israel in his place, since Ahaziah had no sons (2 Kin 3:1).

This also comes from The LORD of hosts
Who has made HIS counsel wonderful
And HIS wisdom great
Isaiah 28:29