Then HE came to the disciples and said to them
Are you still sleeping and resting?
Behold, the hour is at hand
And The SON of Man is being betrayed
Into the hands of sinners
Get up, let us be going
Behold, the one who betrays ME is at hand
Matthew 26:45-46 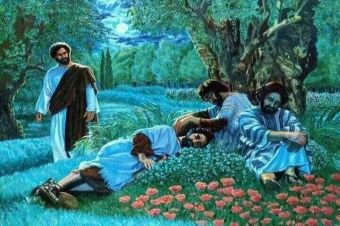 Prologue:
During that last week of JESUS life, HIS soul had already begun to be troubled, knowing what HE would soon go through on our behalf (Jhn 12:20-33). Yet HE did not shrink back, as HE continued to teach and prepare HIS disciples for HIS departure.

On the very night that Judas Iscariot betrayed our Precious LORD JESUS CHRIST, JESUS came to the garden of Gethsemane for a final time of instruction and prayer with HIS disciples. HE spoke to eleven of them (Judas Iscariot had already departed to lead a crowd back to JESUS), giving them information and instructions about the events that would start that very night (Mat 26:30-34). After JESUS spoke with the eleven disciples, HE instructed eight of them to sit down where they were (Mat 26:36, Mrk 14:32). HE then took Peter, James, and John with HIM to the place where HIS agony would be on full display as HE intensely prayed (Mat 26:37, Mrk 14:33). When the four of them arrived at this place, HE instructed them to “keep watch with HIM” (Mat 26:38-40, Mrk 14:33-37). JESUS moved a short distance away from them (Luk 22:41), to pour out HIS heart to our Beloved ABBA FATHER (Heb 5:7, Luk 22:42-43).

What exactly did JESUS mean, when HE instructed Peter, James, and John to “keep watch with HIM?” HIS instruction in Matthew 26:38, was for the disciples to stay awake. And not just stay awake, but to be as alert, sober, and vigilant, as a night watchman. One who guards at night, must be much more diligent than one guarding during the day. During daylight hours, a guard can use their eyesight to easily detect danger. However at night when darkness covers unlit places, guards must rely on all their senses. They must be hyper-vigilant; able to respond in an instant, as JESUS knew the hour and power of darkness was on its way to HIM (Luk 22:53) and to them (Luk 22:31-32, Mrk 14:50, Mat 26:31, Jhn 20:19-21).

Does The BIBLE give a reason for Peter, James, and John failing to “keep watch with JESUS?” Yes, Luke 22:45 tells us the disciples were sleeping from sorrow. According to Thayer’s Greek Lexicon, the English word “sorrow” in Luke 22:45 was transliterated from the Greek word “lúpees” (3077) and in fact means sorrow, as well as pain, grief, or heaviness. “Lúpees” is used of persons mourning. During that final week of HIS Life, JESUS had been speaking to HIS disciples about HIS departure, they had begun to grieve (Jhn 14:1, Jhn 16:5-6, Jhn 16:22). As Peter, James, and John witnessed their Teacher and LORD in such agony they became exhausted from their grief.

Were the disciples really asleep? Yes. Sleep is a recurring state of mind and body that differs from being awake; sleep decreases one’s ability to respond to internal or external stimuli, such as smell, touch, taste, pain, or sound (Act 20:9). The fact that the three disciples were unaware that JESUS had stopped so fervently praying, and risen from where HE had been kneeling (Luk 22:41, Luk 22:45), confirms they were sleeping. This is further confirmed by the usage of this particular Greek word “katheudō” (NT:2518) in Matthew 26:45, which is used of either physical or spiritual sleep.

Conclusion:
This current life is quickly drawing to a close. For some death has already brought this life to an end, for others, they do not know when the end will come, but it will. So please, learn a lesson from the backstory of the current brutal war in Ukraine. For five months our current President, Joe Biden, continually warned the President of Ukraine and its people, that Russia was planning an invasion. And those warnings became more frequent and urgent as the invasion grew closer. But up to the day before the invasion began, those warnings were ignored, even mocked. Because the leader of Ukraine and his people, did not believe it would happen. Thousands of Ukrainians have died, and millions have been displaced from their homes during Russia’s current brutal, bloody invasion. Today is April 12, 2022, the invasion is in its forty-eighth day, and the Ukrainian people are still dying and being displaced.

Our Beloved LORD GOD for thousands of years has continually been warning us of the things which would occur upon this earth. Many of them have happened, but the most severe things are quickly coming upon us, are you still sleeping?

Do this, knowing the time
That it is already the hour
For you to awaken from sleep
For now, salvation is nearer to us
Then when we believed
The night is almost gone
And the day is near
Therefore, let us lay aside the deeds of darkness
And put on the Armor of Light
Let us behave properly as in the day
Not in carousing and drunkenness
Not in sexual promiscuity and sensuality
Not in strife and jealousy
But put on The LORD JESUS CHRIST
And make no provision for the flesh
In regard to its lusts
Romans 13:11-14