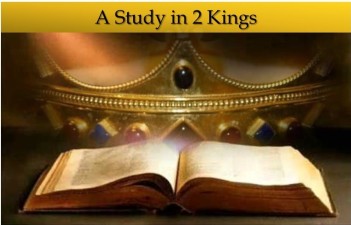 Now behold
There came a man of GOD from Judah to Bethel
By The WORD of The LORD
While Jeroboam was standing by the altar to burn incense
He cried against the altar by The WORD of The LORD
And said, “O altar, altar, thus says The LORD
Behold, a son shall be born to the house of David
Josiah by name
And on you he shall sacrifice the priests of the high places
Who burn incense on you
And human bones shall be burned on you.'”
1 Kings 13:1-2

In the study of 2 Kings chapters 22 and 23, we witness our GOD of Truth (Psa 31:5, Isa 65:16), WHO is literally our GOD of Faithfulness (Deu 32:4, Psa 119:90), continue to demonstrate HIS WORD is true. As reflected in the foundational Scriptures (1 Kin 13:1-2), our Beloved LORD GOD called Josiah by name, more than 300 years before he would be born, and stated a specific deed of devotion he would perform (2 Chr 35:26-27). Throughout this study, our GOD will allow us to attest the truthfulness of HIS WORD, through the life of Josiah.

Our Beloved LORD GOD sent an unnamed prophet from Judah to Bethel speak HIS WORD against an abominable altar set up by the first king of the newly divided northern kingdom of Israel. King Jeroboam did not trust in GOD to keep his promises, so he trusted in himself (1 Kin 12:26-32). As king Jeroboam was offering incense at this abominable altar, the prophet came and cried out against the altar by The WORD of The LORD:

O altar, altar, thus says The LORD
Behold, a son shall be born to the house of David
Josiah by name
And on you he shall sacrifice the priests of the high places
Who burn incense on you
And human bones shall be burned on you

As previously stated, this prophecy was pronounced, more than three hundred years before Josiah was born. Our Beloved LORD GOD called him by name, announced what family he would be born into, and declared the actions he would carry out against the pagan altar at Bethel and the false priests who were serving there (1 Kin 13:1-2).

When Josiah, a direct descendant of king David of Judah was born, the prophecy begin its fulfillment:

The Prophecy is Fulfilled

Did king Josiah die after the prophecy was fulfilled? Not immediately, over the next thirteen years, he completed the restoration and repair of the temple, and reinstituted the Passover. After all this, he went out to engage Pharaoh Neco, the king of Egypt on the plain of Megiddo (2 Chr 35:22). Pharaoh just wanted to pass through Judah on his way to battle against the Babylonians, at Carchemish on the Euphrates river (2 Chr 35:20). He warned king Josiah to turn away from him, because he was on a mission from GOD (2 Chr 35:20-21), king Josiah ignored him, and was killed (2 Kin 23:29, 2 Chr 35:22-23 ). There is an important lesson here that we the people of GOD need to make careful note of; king Josiah had an intimate relationship with our Beloved LORD GOD (2 Chr 34:3). So when Pharaoh Neco told him that he was on a mission from GOD, he simply refused to listen to the Pharaoh, instead of inquiring of GOD (2 Chr 35:22). No matter how many years we have walked with our Holy GOD, we should never lean to our own understanding (Pro 3:5). Instead we should continue to pray about everything (Php 4:6, Luk 18:1, Eph 6:18).

The Beginning of the End

With king Josiah’s death, came the beginning of the end. Because he was a good and righteous king,  Jeremiah the prophet, and all of Judah and Jerusalem mourned for him (2 Chr 35:24-5, Jer 22:10). Soon after occupation, destruction, and exile began in the land of Judah and against its inhabitants, as spoken by the WORD of our Beloved LORD GOD (2 Kin 23:26-27). And then king Josiah’s three sons and grandsons became kings in Judah:

But now, thus says The LORD, your Creator, O Jacob,
And HE who formed you, O Israel,
“Do not fear, for I have redeemed you;
I have called you by name; you are MINE!
Isaiah 43:1