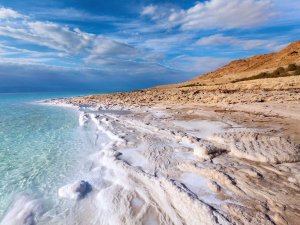 You are the salt of the earth

But if the salt has become tasteless, how can it be made salty again?

It is no longer good for anything, except to be thrown out and trampled underfoot by men.

How does salt become tasteless? To explain this phenomena we must go to the shores of the Dead Sea, where salt contaminated with gypsum and other minerals, can be found. This contaminated salt is flat in taste, and is quite repulsive. When a batch of this contaminated salt found its way into a Palestinian household, it was carefully thrown out. The people of Palestine were careful not to throw it on a garden or field, where it would kill whatever was planted (as demonstrated in Judges 9:45).Instead it was thrown onto a path or road, where it would be gradually trampled underfoot by men, and ground into the dirt and disappear.

As we examined the phenomena of salt becoming tasteless on the shores of the Dead Sea, what we discovered is that tasteless salt is actually salt that has become very impure, contaminated by various impure substances.

As a follower of JESUS CHRIST, HE has called us “the salt of the earth”.  But HE warns HIS followers about becoming tasteless or contaminated by the world and the things in the world (Jam 1:27, 1 Pet 1:14-15, 1 Jhn 2:15-17). Christians become contaminated, conformed to the world rather than transformed by GOD (Rom 12:2), when they:

Our Beloved LORD JESUS CHRIST forewarned us concerning occurrences in these final days, such as sin increasing causing many people’s love of HIM and HIS WORD to decrease (Mat 24:12). Do you honestly know where you stand? I pray each one of us would take the time to examine ourselves (Psa 119:59-60, Lam 3:40, 2 Cor 13:5).

Search me, O GOD, and know my heart;

Try me and know my anxious thoughts;

And see if there be any hurtful way in me,

And lead me in the everlasting way.